Summary: The body of Tracy Kundinger, aged 18 of Thornhill, was located in a park area adjacent to the German Mills Public School, which is located on Simonston Boulevard in Thornhill. The investigation revealed that Tracy Kundinger worked until 10 p.m. on Wednesday, August 21, 1975 as a lifeguard at the Ottawa Indoor Pool located at 650 Parliament Street, Toronto. Tracy was reported to have been wearing a blue jean jacket over a white T-shirt, blue jeans, and a pair of white shoes when she left the Ottawa Indoor Pool, shortly after 10 p.m. on August 20, 1975. Tracy was observed walking with friends to the Castlefrank Subway Station, and ultimately took a Don Mills North bus to Steeles Avenue, leaving the bus at 10:50 p.m. A man who had been the only other passenger of the bus, described as 22 to 24 years of age, 175 to 180 lbs., with sandy, collar-length wavy hair and wearing a white denim jacket and jeans, got off the bus at the same time and was seen to walking in the same general direction as Tracy. It is believed that Tracy walked northwest from the intersection of Don Mills Road and Steeles Avenue toward her residence, and across the park area that surrounded German Mills Public School and St. Michael’s Catholic Elementary School. Tracy Kundinger died as a result of asphyxiation. 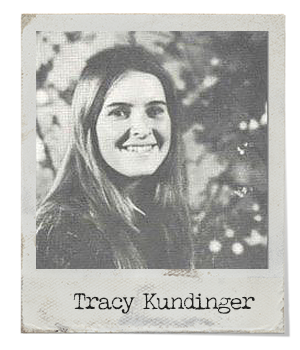 At 5:30 on the afternoon of Thursday, August 21st, 1975, two young boys riding their bikes on mounds of top soil on the grounds of German Mills Public School at 61 Simonston Blvd. in Thornhill, just north of Toronto, stumbled upon the dead body of a young woman. She was 18-year-old Tracy Kundinger, who lived with her parents on nearby Monsanto Ct. She had been strangled with a piece of twine. There was no sexual assault. She had not been reported missing because her parents were away on holiday and she was home alone. 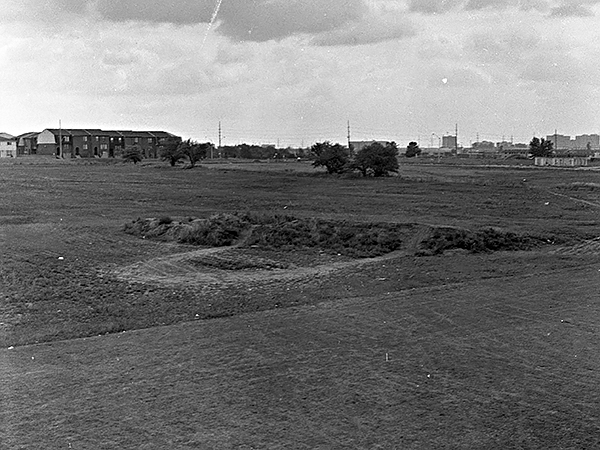 Police believed Kundinger, returning from her summer job as a lifeguard at a pool in downtown Toronto, took a shortcut northbound through a park after getting off a Toronto Transit bus at Leslie St. and Steeles Ave. E. Wednesday night, and that her killer followed her as she made her way through the woods. 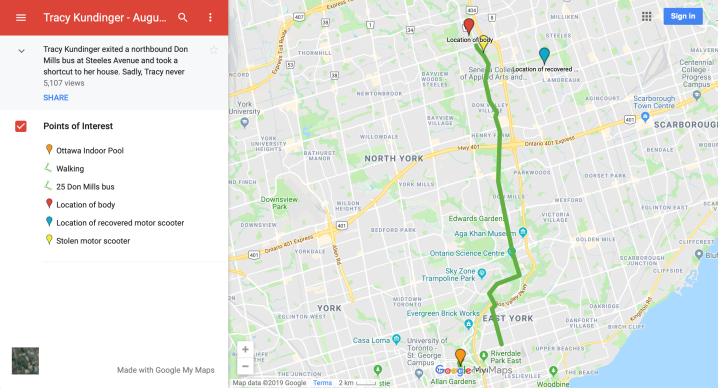 A few days later, police issued an appeal seeking a suspect. Described as a white male in his early to mid-20s, about 5’8″ to 5’11”, with a fair complexion and well-groomed light-brown hair combed over his forehead, he was the only other passenger with Kundinger on the bus on Wednesday night, and they got off at the same stop at about 10:50 p.m. 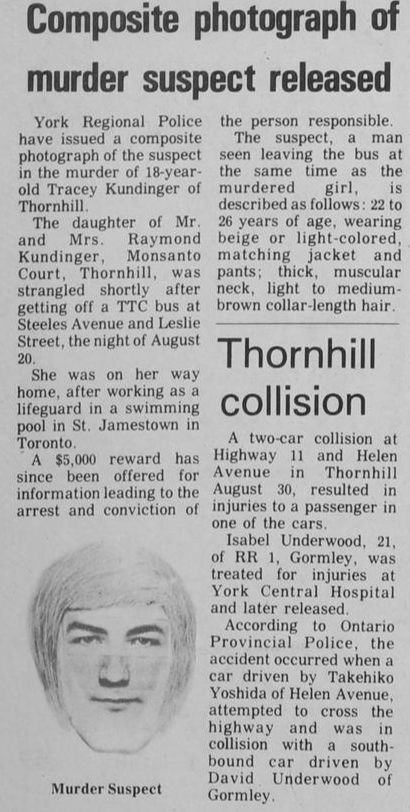 Note:  A solid suspect was later arrested, a 34-year-old mental patient who had an unusual interest in the crime, but the case against him fell apart in 1977 when it was established he had been fed details of the crime by a former policeman.

Arrest made in murder of girl, 18

A 34-year-old Toronto man has been charged with the non-capital murder of an 18-year-old Thornhill woman whose strangled body was found in a schoolyard in August, 1975.

He is charged with the slaying of Tracy Lynn Kundinger, of Monsanto Ct., whose body was found by children playing in a park behind the German Mills Public School on August 20, 1975.

Police say Ferguson is single, unemployed and on welfare.

John Ferguson, 34, of Gerrard Street in Toronto, has been charged with non-capital murder of Tracy Kundinger, 18, of Monsanto Court in Thornhill who was killed in August of last year.

At that time, the girl’s strangled body was found by children playing in a park behind German Mills Public School.

York Regional Police have been working on the case ever since.

Crown Attoney Iain Cunningham said he recommended the accused be sent to Penetanguishene after he had refused to co-operate with police.

He said Ferguson had been examined by Dr. Gerald Cooper, a psychiatrist at York-Finch Hospital, who described his behavior as “very bizarre.”

Police said the accused was single and on welfare.

There were no other arrests made, though further rapes occurred in the area over the next few years. 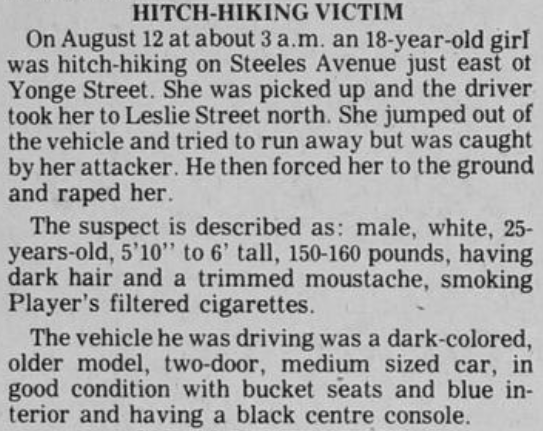 A woman was accosted at knifepoint last night in an area that has seen one unsolved murder and numerous rapes and indecent assaults.

It was the second such incident in a week.

York Regional police said a 20-year-old woman was waiting for a bus on Don Mills Rd. just north of Steeles Ave. when she was approached by a man with a knife who told her to accompany him.

Police said the armed man led the woman to a townhouse construction site and as they were about to enter the woman began to struggle and escaped.

About a week ago, a 19-year-old woman was grabbed by a man who produced a knife. The assault occurred in almost exactly the same spot.

The Grade 13 student was strangled. Her body was found in a field near the German Mills public school. Her killer has never been found.

Police say there have been a number of other rapes and attacks on women in the same area of Thornhill and in Metro just south of Steeles Ave. over the past 18 months but there have been no arrests.

Metro Police have arrested and charged a man with rape and attempted rape and York Regional Police have reason to believe he is the same man wanted in connection with similar crimes in the Don Mills – Steeles Avenue East, area.

Detective Sergeant Robert Wilson, in charge of the York Region investigation, said if and when the accused man is released by Toronto police, he will face charges resulting from a rash of incidents not far from Markham Place Mall, Thornhill, including three counts of abduction, one count of rape, two counts of attempted rape and two counts of indecent assault.

Murray MacDonald, manager of the shopping centre, said he is relieved the situation is now under control, especially for the sake of female employees.

Noting there was constant surveillance of the community around the mall, he felt thanks to York Region Police for their efforts were in order.

Detective Sergeant Wilson said the charges of abduction arose when a man (on three occasions) grabbed women by the arm at knifepoint and led them to secluded areas of the neighborhood.

Twice, victims were able to escape but another was taken to a vacant townhouse and raped.

“Our charges are different from those Metro laid in connection with incidents in Scarborough. Those acts happened inside cars but the ones up here included taking the victims from one place to another – that’s abduction,” said the Detective Sergeant.

Charged with rape and attempted rape by Metropolitan Toronto Police is Raymond Wallace, 31, of Brookbanks Road in Don Mills.

Man jailed for trying to force woman into car

A man who tried to force a woman into his car at knife point has been sentenced to six months and placed on two years’ probation.

Philip Young, 25, of Summerhill Rd. pleaded guilty earlier to a charge of assault with intent to commit an indictable offence and was sentenced yesterday by County Court Judge William Rogers.

Crown attorney Steve Howarth told the court people like Young threaten to ruin Metro’s reputation for being a city with safe streets.

According to a police synopsis, a 25-year-old woman was walking home from a bus stop in the Don Mills Rd. and Lawrence Ave. E., area about 2:30 a.m. last February 10.

She refused to Young’s invitation to give her a ride in his car and moments later he got out, grabbed her and produced a butter knife.

He held the knife first against her stomach and then near her throat as her ordered her to get into his car.

The woman dropped her briefcase and purse, ran into the middle of the road and flagged down a passing car.

At this point, Young handed her the purse and briefcase and told her he never had a knife. He got into his car and drove off.

The woman, “crying and shaking,” got into the passerby’s car and they followed Young and then went to a police station.

When police arrested him, Young said he had been drinking.

An 18-year-old Thornhill girl motorist was stopped and dragged into a field in Markham near Buttonville at 11:15 pm by a would-be rapist. But she escaped serious harm when another came by and the youthful attacker fled in his (the attacker’s) vehicle, police say.

Held in custody for a bail hearing at Richmond Hill Court was Michael Kloc of 162 Bayview Fairways Drive, Thornhill. Police said Kloc was already out on bail and facing a May charge of rape in a Metro court. YRP charged Kloc with attempted rape and with impersonating a police officer.

The lone girl motorist told YRP her attacker followed her in a vehicle, pulled her over and stopped her, saying he was a police office. When he got her out of her car he pulled her into the field on Concession 5 road north of Highway 7.

He was struggling with her on the ground when the other motorist came along and frightened the attacker away. The girl fortunately suffered nothing more than minor abrasions, said police, who declined to reveal her name.

At a bail hearing, Provincial Judge Russell Pearce issued a detention order for Kloc until trial, ordering that the youth be brought back to the court from Don Jail weekly. A late August trial date was expected.

Note: Kloc was likely in jail at the time of Tracy’s murder, but clearly as shown with him out already on bail while committing this crime, anything is possible in Canada’s lax justice system. He can’t be discounted until his whereabouts at the time nearly one year to the day later are confirmed. I haven’t been able to find any further information on Kloc as of yet.

Kloc lived just over 1 km from Tracy and quite possible went to school or at least knew Tracy.

Note:  Wallace was never charged with Kundinger’s murder and it’s not known if he was even considered by York Regional Police as a suspect as were any of the others.  An attempt is being made as of January 15, 2019 to verify if any of these suspects (Wallace, Young or Kloc) were ever looked at.

Further to this, a couple of tips were received about an ex-boyfriend of Tracy’s that may have been involved.  The name and the interviews are being withheld for privacy.

Below is a partial screen grab of a map showing the locations of rapes and assaults in the area from 1970 – 1980.

Below is a link to a searchable Google Map showing the locations of Tracy’s murder and numerous sexual assaults and rapes in the vicinity from 1970-1980.  Clicking on the highlighted point will give you more information about each crime.